Two wars – the 1857 Revolt in India and the American Civil War – seemingly fought for very different reasons, occurred at opposite ends of the globe in the middle of the nineteenth century. But they were both fought in a world still dominated by Great Britain and the battle cry in both conflicts was freedom. Rajmohan Gandhi brings the drama of both wars to one stage in A Tale of Two Revolts. He deftly reconstructs events from the point of view of William Howard Russell – an Irishman who was also perhaps the world’s first war correspondent – and uncovers significant connections between the histories of the United States, Britain and India. The result is a tale of two revolts, three countries and one century. Into this fascinating story Rajmohan Gandhi weaves the choices of three towering figures of world history – Karl Marx, Leo Tolstoy and Abraham Lincoln – to show the continuities between the nineteenth century and the world we live in today.

RAJMOHAN GANDHI, the grandson of Mahatma Gandhi, is Visiting Professor in the Program in South Asian and Middle Eastern Studies, University of Illinois at Urbana-Champaign. A former member of the Rajya Sabha (the upper house of the Indian Parliament), he led the Indian delegation to the UN Human Rights Commission in 1990.

Interviews with Rajmohan Gandhi about A Tale of Two Revolts

The Hindu, Rajmohan Gandhi talks to Gowri Ramnarayan about what inspired his latest book and how he managed to strike a balance between scrutiny and passion. Read full interview here.

Also by this author, Ghandi. 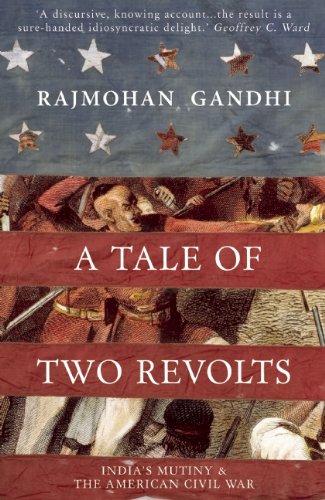