COMMONS AND LORDS
A Short Anthropology of Parliament

‘original and very revealing’ – The Guardian

The Westminster Parliament is worth closer scrutiny not just for the sake of democracy, but on intellectual grounds because the surprises it contains challenge our understanding of politics. Based on anthropological fieldwork between 1998-2000 in the House of Lords and 2011-2013 in the House of Commons and constituencies, this Curiosity explains how relationships within the two Houses are utterly different from their surface appearances. The high social status of peers in the House of Lords gives the impression of hierarchy and, more specifically, patriarchy. In contrast, the Commons conjures assumptions of equality and fairness between members of the lower House. But observation of the everyday relationships within the two Houses reveals the opposite: while the Lords has an egalitarian and co-operative ethos, and women thrive in the upper House, the competitive and aggressive Commons is a far less comfortable place for women.

Paradoxically MPs have to be both an individual, serving their constituents, and a symbol of a collective, their political party. The inevitable messiness of representative politics, and the disappointment it brings, are both the virtue and weakness of parliamentary democracy. Emma Crewe looks beneath the surface and uncovers its surprises and secrets.

EMMA CREWE is a Research Professor at the Department of Anthropology and Sociology at SOAS. She is the author of Lords of Parliament: manners, rituals and politics (2005), Anthropology and Development: Culture, politics and morality (2013) and The House of Commons: an anthropology of the work of MPs (2015).

Also by this author An Extraordinary Scandal. 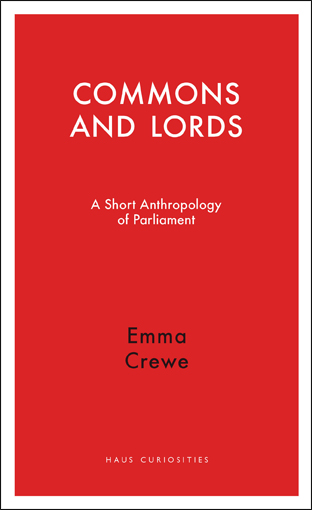