‘Hennessy’s account will long rank as the most candid portrait of how the referendum was experienced in Whitehall … It has the gravitas and sensibility of a diary charting the last days before the outbreak of war, and it’s all strangely thrilling.’ – Scottish Review of Books

‘a profound insight into the way in which British politics and the political processes work. It delves into Britain’s constitutional vagaries, the question of whether the UK should adopt a formal constitution, and highlights how Britons of the various and distinct cultures view their own overarching sense of identity’ – Strategic Policy

In The Kingdom to Come Peter Hennessy records the run-up to the Scottish Independence Referendum in September 2014, its immediate aftermath and describes the enormous constitutional building site opened up for the whole of the United Kingdom by the result. This Haus Curiosity includes Lord Hennessy’s personal impressions of the time when the Act of Union, over 300-years-old, was called into question and when he, as one of the country’s foremost experts on our unwritten constitution and a Professor of Contemporary British History, became an important voice in what the future may hold. The Kingdom to Come examines the possible agenda for the remaking of the constitution in the medium and long term.

PETER HENNESSY is Attlee Professor of Contemporary British History at Queen Mary, University of London. He was educated at Marling School, Stroud; St John’s College, Cambridge; the London School of Economics and Harvard (where he was a Kennedy Scholar 1971–72). He spent 20 years in journalism with spells on The Times, the Financial Times and The Economist and as a presenter of the BBC Radio 4 Analysis programme. He is a Fellow of the British Academy and sits as an independent crossbench peer in the House of Lords as Lord Hennessy of Nympsfield.

Also by this author, Establishment and Meritocracy, Reflections Volume 1 and Volume 2, The Complete Reflections, The Power of Civil Servants. 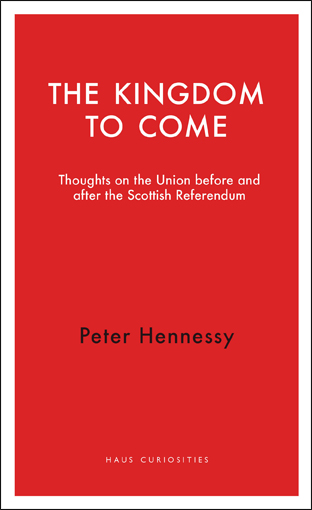