A WOMAN IN THE CROSSFIRE
Diaries of the Syrian Revolution

‘As powerful a book as I’ve read in years.’ – The Guardian

‘An essential eyewitness account, and with luck an inaugural document in a Syrian literature that is uncensored and unchained.’ – Kirkus Reviews

‘the heartbreaking diary of [a woman] who risked her life to document the regime’s brutal attacks on peaceful demonstrators.’ – The Inquirer

‘one of Syria’s most gifted novelists’ – CNN

‘… a remarkable, devastating account of the three increasingly dangerous trips that Yazbek made to northern Syria in 2012 and 2013, sneaking over the Turkish border each time‘ – The Nation

A well-known novelist and journalist from the coastal city of Jableh, Samar Yazbek witnessed the beginning four months of the uprising first-hand and actively participated in a variety of public actions and budding social movements. Throughout this period she kept a diary of personal reflections on, and observations of, this historic time. Because of the outspoken views she published in print and online, Yazbek quickly attracted the attention and fury of the regime, vicious rumours started to spread about her disloyalty to the homeland and the Alawite community to which she belongs. The lyrical narrative describes her struggle to protect herself and her young daughter, even as her activism propels her into a horrifying labyrinth of insecurity after she is forced into living on the run and detained multiple times, excluded from the Alawite community and renounced by her family, her hometown and even her childhood friends. With rare empathy and journalistic prowess Samar Yazbek compiled oral testimonies from ordinary Syrians all over the country. Filled with snapshots of exhilarating hope and horrifying atrocities, she offers us a wholly unique perspective on the Syrian uprising. Hers is a modest yet powerful testament to the strength and commitment of countless unnamed Syrians who have united to fight for their freedom. These diaries will inspire all those who read them, and challenge the world to look anew at the trials and tribulations of the Syrian uprising.

SAMAR YAZBEK is a Syrian writer and journalist, born in Jableh in 1970. She is the author of several works of fiction, including Cinnamon. An outspoken critic of the Assad regime, but also of what she identifies as erroneous perceptions of ideological conformity within the Syrian Alawite community, Yazbek has been deeply involved in the Syrian uprising since it broke out on 15 March, 2011. Fearing for the life of her daughter she was forced to flee her country and now lives in hiding. Yazbek was awarded the Pen/Pinter International Writer of Courage Award 2012, awarded to an author of outstanding literary merit who casts an ‘unflinching’ eye on the world.

MAX WEISS is an American scholar and translator, specialising in the culture and history of the Middle East.

‘The Political and the Cultural: A Conversation with Samar Yazbek’. Nayla Mansour interviews Syrian novelist and human rights acvocate Samar Yazbek on Syrian, politics, Assad trimph and Islamist counter-revolutionaries, and the role of intellectuals and politicians amidst all of the mess. Read full interview here.

Samar Yazbek in converation with Peter Clark at the Frontline Club: 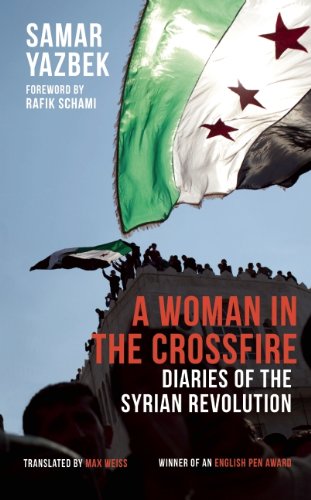