CABINET’S FINEST HOUR
The Hidden Agenda of May 1940

‘… a powerful case for seeing the vital British decision to fight on against the Nazis in May 1940…  An exciting, thought-provoking read, with profound contemporary as well as historical relevance.’ – Andrew Roberts

‘David Owen has thought deeply about these issues – and is always worth reading.’ – Dominic Lawson

Former Foreign Secretary David Owen has written a new history of the pivotal British War Cabinet meetings of May 1940. The minutes of these meetings reveal just how close Britain came to seeking a negotiated peace with Nazi Germany. Cabinet’s Finest Hour is both the story of Churchill’s determination to fight on and a paean to the Cabinet system of government. The Cabinet system, all too often disparaged as messy and cumbersome, worked in Britain’s interests and ensured a democracy on the brink of defeat had the courage to assess the alternatives to fighting on. The post-war denial of both the existence and legitimacy of the war cabinet debates had far-reaching consequences for Britain’s foreign policy for the rest of the century, notably over the Suez Crisis but arguably as far as the Second Iraq War.

DAVID OWEN trained as a medical doctor and practised as a neurologist before being elected a Labour MP in his home city of Plymouth. He served as Foreign Secretary under James Callaghan from 1977 until 1979, and later co-founded and went on to lead the Social Democratic Party (SDP). Between 1992-95 Lord Owen served as EU peace negotiator in the former Yugoslavia, and he now sits as an Independent Social Democrat in the House of Lords. Visit David’s blog, here.

Also by this author, The Hidden Perspective and The UK’s In-Out Referendum. 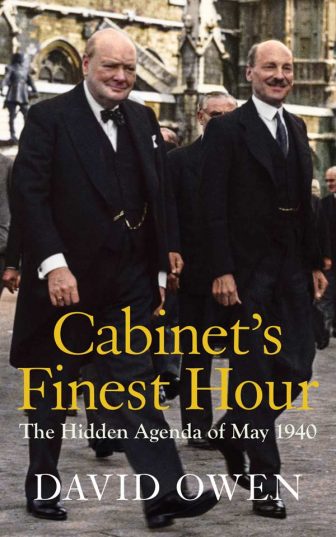