‘The greatest Weimar poets, thinkers and creators gathered in a couple of elevated neighbourhoods and dreamed an impossible dream. Thomas Sparr brings it brilliantly to life in this scintillating evocation of an intellectual paradise.’ – Norman Lebrecht

‘[Sparr’s] tome effectively performs the function of a topographical Gedenkbuch – a memorial book comprised of a dense, spatio-temporal network of names and addresses, recording who settled here and when. And, intriguingly, who said what to whom and fell out as a result.’– Professor Nicolas Whybrow, University of Warwick

‘Based on intimate knowledge, careful study and eloquent style, Thomas Sparr takes the reader through Rehavia streets to meet with German speaking immigrants and refugees, follow their debates and hopes as well as wonder on their traces in present Jerusalem.’– Menachem Klein, author of Lives in Common: Arabs and Jews in Jerusalem, Jaffa and Hebron

‘I highly recommend this book which brings to life a first-class historical/human story of Rehavia as Jerusalem’s intellectual, cultural and architectural landmark.’– David Kroyanker

‘Lively and poignant, German Jerusalem captures the key personalities and spirit of a remarkable time and place. This book will no doubt contribute to a greater appreciation of vital aspects of Jerusalem’s history that are in danger of being eclipsed from memory.’– Michael Berkowitz

Planned at the beginning of the 1920s as a garden city on the fringes of Jerusalem, the suburbs of Talbiyeh and Rehavia became a centre of emigration for German Jews from 1933 onwards, acquiring the nickname ‘Grunewald on the Orient’ – a reference to the residential south-western district of Berlin. The neighbourhood became a vibrant German–Jewish microcosm with residents including the poet and playwright Else Lasker-Schüler, the historian Gershom Scholem, and the philosopher and scholar Martin Buber. It was an idyllic setting, but life was also tough and could be unforgiving; the city had long been divided, and the residents of Talbiyeh and Rehavia found themselves caught up in the conflict. After the war, the recent history of the Shoah weighed heavily on the neighbourhood’s inhabitants, but it also became a place of German Israeli rapprochement. German Jerusalem is a story of a culturally distinctive community, and a fascinating biography of those who lived and worked there.

THOMAS SPARR worked at the Hebrew University in Jerusalem’s Leo Baeck Institute from 1986 to 1989. Today he lives in Berlin where he works as an editor-at-large for Suhrkamp and as an independent writer and scholar. 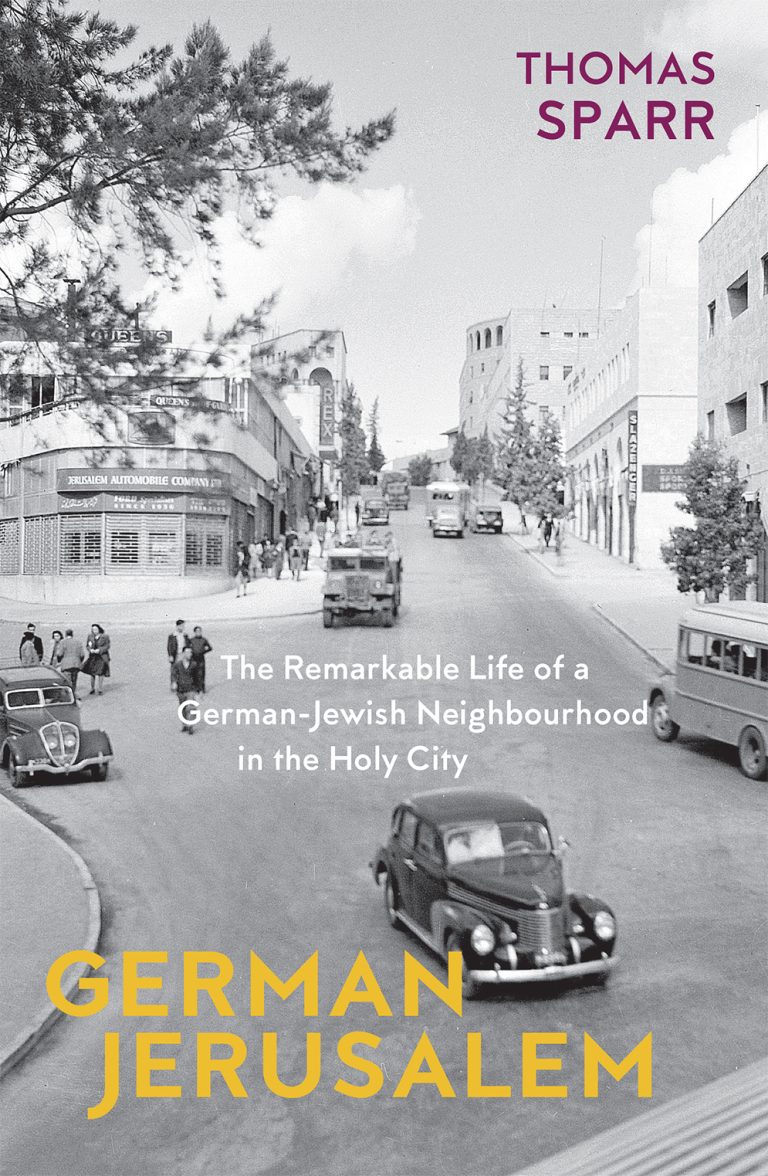