The Socialist politician Karl Renner (1870-1950) was prime minister of the government that took power in Vienna after the collapse of the Austro-Hungarian Empire. He lead the delegation to Paris, which had to face the difficult issue of reparations and war guilt, for which the Allies held the successor states to the Empire responsible for. Fortunately, Renner was a likeable man and a realist, and the Austrian delegation became quite popular in Paris. The new Austrian state was in a perilous condition in 1919, on the brink of starvation and revolution, and facing territorial demands from both Italy, which had its eyes on the Tyrol, and the new Yugoslavia. Many in the German-speaking rump of the Empire sought union with Germany, Anschluss, but the Allied Powers vetoed it. Austria is often overlooked as one of the successor states to the Habsburg Empire, but it was no less important in the postwar settlement than Hungary, Czechoslovakia and the Balkan countries. Jamie Bulloch’s account of Karl Renner’s adroit handling of a difficult situation makes for fascinating reading.

ALAN SHARP (editor) is Provost of the Coleraine Campus at the University of Ulster. He joined the History Department at Ulster in 1971 and has been successively Professor of International Studies, a post in which he helped to set up degrees in International Studies and, later, International Politics and Head of the School of History and International Affairs. His major publications include The Versailles Settlement: Peacemaking in Paris, 1919 (1991) amongst others. 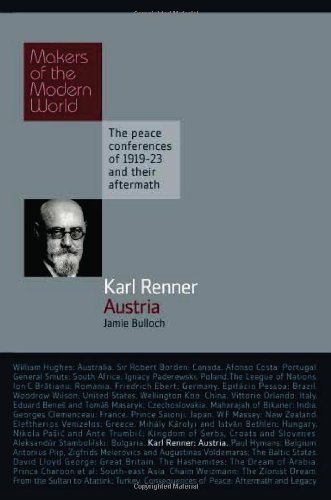