MY HOUSE IN DAMASCUS: AN INSIDE VIEW OF THE SYRIAN CRISIS
by DIANA DARKE

‘This is a love letter to Syria…Read it and you will discover a Syria that lies behind our daily headlines’
– Lyse Doucet, BBC Chief International Correspondent

‘Diana Darke brings her vivid eye and human sensitivity to a country we only know through recent bloodshed. I felt I had travelled deep into its heart when I finished her remarkable book’
– Tina Brown

‘Diana Darke’s book is set in the Syria of Bashar al-Assad, who succeeded his father in 2000. Ms Darke is a journalist and travel writer, and much of her early time in Syria was spent walking its hills and exploring its mosques, churches, monasteries and fortresses. But in 2005 she took the bold decision to use her life’s savings to buy an 18th-century Ottoman house in the Old City of Damascus. Her book, now in an enlarged third edition, tells the remarkable story of how she did so, despite a succession of legal and bureaucratic obstacles, and the onset of civil war.’
– The Economist

‘[W]ritten with the pace of a novel and the colour of the best travel writing…[T]he book offers much more than a personal memoir: it is an eclectic but learned encyclopedia of Syrian history, of the Arabs and their language and traditions, of Islamic art and architecture, and more.’
– Times Literary Supplement

‘… an elegy to a lost world. [My House in Damascus] gives the conflict a human face which remains hidden in much media coverage.’
– The World Today, Chatham House

‘[My House in Damascus] glows with…an understanding of and affection for the peoples of Syria.’
– Irish Times

‘Written with honesty, wit and affection.’
– The Tablet

How did Syria’s revolution lose its way? Using her first-hand knowledge of the country’s complex religious and ethnic communities, Diana Darke illuminates the darker recesses of Syria’s history, politics, and society.
A fluent Arabic speaker, she became deeply embedded in all levels of Syrian society when she bought and restored a house in a mixed Sunni/ Shi’a neighbourhood of the walled Old City of Damascus.

As fighting intensified and millions were forced to flee their homes, she offered her house as a sanctuary to friends. By following her experiences and struggles with the realities of life on the ground inside Syria, the reader will arrive at a clearer understanding of why the country remains locked in conflict and why most ordinary Syrians are caught between a repressive government and a splintering opposition, now overshadowed by a monster called ISIS.

Diana Darke is the author of the Bradt Travel Guide to Syria and has had a keen interest in the country since her first visit in 1978. She was forced to leave Damascus when the revolution began, but she has returned five times since.

A proportion of the list price of the book will be donated to a higher education fund set up by the Said Foundation, a charity dedicated to providing young Syrians with the skills and support to become a new generation of leaders. Syria has suffered terrible physical and psychosocial destruction over the past three years, and the political transition after the conflict has subsided will inevitably be fragile. Skilled leadership with well-educated support will be essential to help steer the country through this critical post-conflict period.

The Said Foundation also supports Syria Relief, a charity set up by Syrians in 2011 to bring humanitarian and medical relief to the parts of Syria where UN and other international agencies have not been permitted to operate. 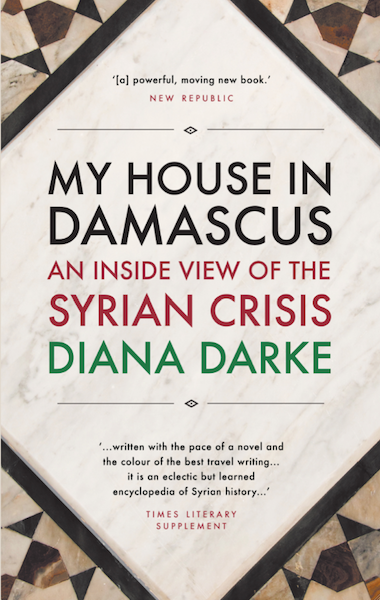