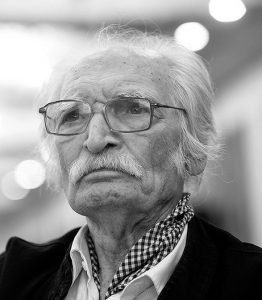 Mahmoud Dowlatabadi is one of the Middle East’s most important writers. Born in 1940 in a remote farming region of Iran, the son of a shoemaker, he spent his early life and teens as an agricultural day labourer until he made his way to Tehran, where he began writing plays, stories and novels. Dowlatabadi pioneered the use of the everyday language of the Iranian people as suitable for high literary art. His books include Missing Soluch, his first work to be translated into English, and a ten-book portrait of Iranian village life, Kelidar. In 1974, Dowlatabadi was arrested by the Savak, the Shah’s secret police. When he asked what crime he’d committed, he was told, ‘None, but everyone we arrest seems to have copies of your novels, so that makes you provocative to revolutionaries.’ He was in prison for two years. Dowlatabadi’s Thirst was published by Haus in 2014.