THE GLORY OF LIFE, by MICHAEL KUMPFMÜLLER. Trans. by Anthea Bell

In July 1923, Franz Kafka is convalescing by the Baltic Sea when he meets Dora Diamant and falls in love. Set over the last year of Kafka’s life, the tale of Franz and Dora’s fragile time together in a Germany juxtaposes the excitement and vitality of Weimar Berlin with Kafka’s indecision and failing health. Mediated through letters, telegraphs, and the telephone, Michael Kumpfmüller captures the exhilaration of modernity and the essence of a friendship nourished by communication. The Glory of Life meditates on what really makes life worth living. A compelling combination of historical research and fictional reconstruction, this evocative and artful novel captures the inner life of one of the twentieth century’s most influential and revered literary figures.

Michael Kumpfmüller was born in Munich, Germany, in 1961 and now lives in Berlin. His debut novel The Adventures of a Bed Salesman was published in 2003 to critical acclaim, and his 2009 novel Message to All won the Alfred Doblin Prize.

Anthea Bell‘s translations include W.G. Sebald’s Austerlitz, Wladyslaw Szpilman’s memoir The Pianist, E. T. A. Hoffmann’s The Life and Opinions of the Tomcat Murr, as well as a large selection of Stefan Zweig’s novellas and stories. Her prizes and awards include the Independent Foreign Fiction Prize with the author, the Helen and Kurt Wolff Prize, the Oxford-Weidenfeld Translation Prize, and the Schlegel-Tieck Prize. 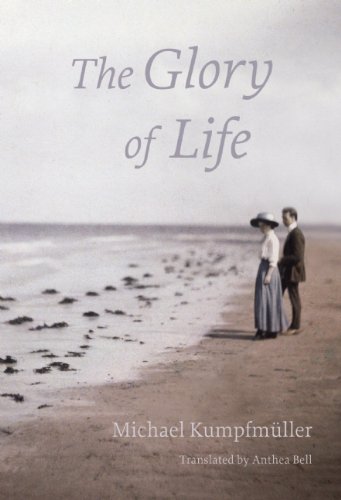 Winner of the 2013 Jean Monnet Prize for European Literature

‘The Glory of Life, elegantly translated by Anthea Bell, avoids the pitfalls of kitsch and pathos. While it starts off rather slowly, it soon gathers momentum. The result is a painful, engrossing story in its own right, regardless of our prior interest in the protagonist. Its core themes – love in the face of death and the resilience of hope – are as timeless as Kafka’s own writings.’
– The TLS

‘a love story, and an unfashionably gentle and tender one’
– The Scotsman

‘This beautifully written, meticulously researched, and sensitively translated work reveals love’s ability to carve out a small, simple paradise—a shelter from mounting chaos and a respite, however temporary it might be, from the unrelenting approach of death.’
– Foreword Reviews

‘a story of the disintegration of a great writer who continued writing until the last days of his life, a story of love under the spectre of death, and the incredible resilience of hope.’
– Washington Independent Review of Books

‘Kumpfmüller sets a beautiful and overdue memorial that contrasts common depictions of Kafka as somber, lonely and Oedipal with a hitherto unprecedented lightness.’
– Jewish Journal