CROSSING JERUSALEM: JOURNEY AT THE CENTRE OF THE WORLD’S TROUBLE
by Nicholas Woodsworth

Jerusalem is not an ordinary city and Crossing Jerusalem is not a standard telling of a city’s story. While the author himself is deeply skeptical of religion, this book is both a portrait of a spiritual Jerusalem, and a recounting of the effect the city has on the spirit of one visitor who discovers its ongoing distress – through it he discovers some sort of spirituality in himself. At the same time a travelogue, a questioning of spiritual values, and an examination of the beliefs that have sustained Jerusalem’s populations through centuries of conflict and division, Crossing Jerusalem offers an unusual and penetrating perspective of the city. While many of the themes the author touches upon are inevitably sensitive and controversial, Crossing Jerusalem is intended to provoke thought rather than antipathy. At a time when both Jewish attitudes and the West’s foreign policy options on a Middle East solution are evolving, Crossing Jerusalemis now especially relevant.

Nicholas Woodsworth was born in Ottawa, Canada in 1953 and grew up in Africa and South-East Asia. He was Africa Correspondent for the Financial Times in the late 1980s, and served as the FT Weekend’s staff travel writer from 1990 to 2003. He lives with his wife, Jany, in Aix-en-Provence.

Also by this author, Seeking Provence and The Liquid Continent. 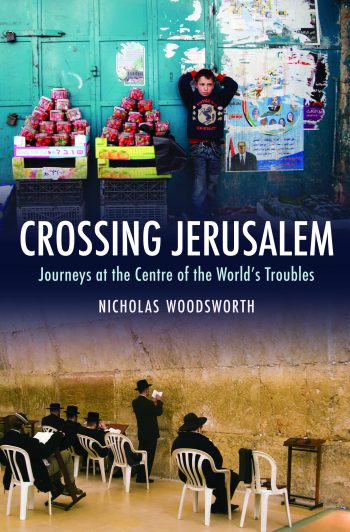