AN ARMCHAIR TRAVELLER’S HISTORY OF TOKYO
by Jonathan Clements

‘Clements’ skillset – Asian specialist, linguist, historian and foodie – might have been designed specifically for his newly published Armchair Traveller’s History of Tokyo, combining as it does a history of the city from a time of myth, conjecture and hazy record to the current year 2018 with a gazetteer containing a selection of the sights and attractions of the city.’  – Helen McCarthy, All the Anime

This history of Japan’s modern capital spans from the first forest clearances on the vast Kanto plain, through the wars and intrigues of the samurai era, and up to the preparations for the 2020 Olympic Games. Tokyo, meaning ‘Eastern Capital’, has only enjoyed that name and status for 150 years. Before then, it was the site of Edojuku (‘Estuary Camp’), a medieval outpost designed to keep watch over rich farmlands. Known as Edo in the early modern period, the Tokyo region became the administrative centre of Japan’s Shotgun overloads and the site of a vibrant, vivid urban culture of theatres, taverns and brothels. After the Meiji Restoration in 1868, it became Japan’s true capital, home to the emperors, the seat of government and a site of rapid urban growth.

Jonathan Clements is an author and TV presenter specialising in the history and cultures of the Far East. He speaks both Chinese and Japanese, and has been a consultant and talking head on numerous TV programmes, including New Secrets of the Terracotta Warriors (Channel 4), Koxinga: Sailing into History (National Geographic), China’s Jade Empire (Channel 4), and TheChinese Chariot Revealed (PBS). Since 2016, he has fronted the award-winning series Route Awakening (National Geographic Asia). His most recent documentary as presenter is Shandong: Land of Confucius, also for National Geographic. Visit Jonathan’s blog, here. 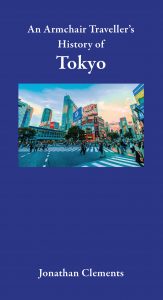